The life president of the Laughing Policeman Wireless society has been in the news this week in the form of a legal case involving another radio amateur. Nigel Hopkins (G1XYU) is known for his somewhat unconventional radio antics during the 80's and early 90's which can be heard on the Laughing Policeman website. The LPWS, in its heydey was a large group of amateurs from all over the UK but has dwindled over the past couple of decades with most active stations now QRT. 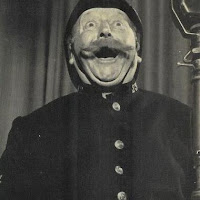 Anyway here is Nigels story from the Kidderminster Shuttle:


A BLIND disabled amateur radio ham harassed someone on the airwaves leaving them living in fear.
Nigel Hopkins almost had his license revoked and his radio equipment seized after repeatedly broadcasting hurtful things about someone, who The Shuttle has chosen not to name, while encouraging others to do the same between January 21 and April 25 last year.

The 62-year-old, who is confined to his home in the Blakebrook area, Kidderminster, unless he is with his carers because of his disabilities, had pleaded not guilty to the harassment without violence charge when he appeared at Kidderminster Magistrates' Court on October 9 last year but was found guilty at a trial in his absence on June 18.

But, Hopkins appeared at the court again on Thursday, June 25, with his solicitor, Fergus Maxwell, looking to reopen the case in the interest of justice claiming he did not attend or make contact with the court on the day of his trial because he had lost the key to his front door and by the time he had found it, which was difficult because he has been completely blind for a number of years, and was able to speak to his carers, he had already been convicted.

However, the magistrates did not accept this as a reason for not attending his trial. Chairman of the magistrates Sue Roberts said: "We do not accept you did all you could to notify the court of your difficulty. Your conviction therefore stands." Mr Maxwell said Hopkins maintained his innocence and an appeal to crown court may follow. As it was not possible to sentence Hopkins during the trial due to his absence, he was sentenced during this hearing.

He was given 26 weeks in custody, suspended for 18 months and made subject to a restraining order banning him from contacting the victim directly or indirectly or broadcasting about them or visiting their home.
Hopkins was also ordered to pay £200 compensation to the victim and an £80 victim surcharge.

Manchester, UK.
Posted by The MJJ Collection at 4:54 PM