Myself and Roydan M0LEX participated in the VHF RSGB UKAC last night (Tuesday 6th October) so I thought I'd get a blog post up about it. I say WE participated, it was Roydan in the hot seat for the contest, I helped set up the antenna and provided the drinks instead of competing. Not to say I didn't have a great time. It's always nice to see so many stations take part in the event from up and down the country. It makes a change from hearing the bands dead. Roydan worked 110 stations in the 2 hour 30 minute contest with some nice Scottish, Irish and even a Belgian station coming through. 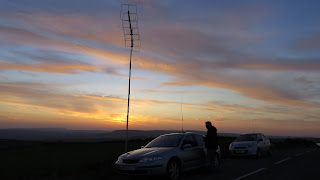 We stopped at our usual spot between Heywood and Norden which are 2 towns between Bury and Rochdale. The site is on the edge of Scout Moor Wind Farm which boasts some impressive turbines that are surprisingly quiet as their blades spin. Ashworth Hill Reservoir lies a few hundred yards to the North. You can usually see as far as Holme Moss Transmitting Station to the East and as far as the hills of Blackburn and Darwen to the West. The view North is obscured by the Scout Moor Wind Farm and the view South stretches as far as the eye can see towards Manchester Airport and Alderley Edge. Unlike the last 2 contests we've done, the rain was coming down and it not only made visibility very poor, it also made setting up the beam and putting it on the mast hard work. I usually take lots of photographs and video footage of the setup and contest itself but it just wasn't possible. I've got some video footage of the contest which I'll upload to my YouTube as and when. We perservered in the rain and got in the car and waited for the contest to start.

We had a really busy start with the first 30 stations coming through in the first 10-15 minutes but it did slow down after that. The 110 he worked was really impressive. We spoke car to car DMR simplex on the way up to the site and the TYT MD-380's really worked well. I put a couple of calls out on 2m after the contest and got nothing back. I always enjoy visiting the spot as I can open so many repeaters on a handheld from Stoke to Blackpool, Llandudno to Huddersfield and everywhere inbetween.

Below is the list of stations worked and their location marked on a map (click to enlarge): 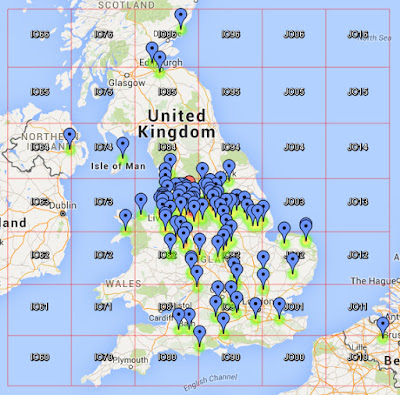 Manchester, UK.
Posted by The MJJ Collection at 8:36 AM