I've been looking for a replacement for my Kirisun S780's since I sold them as me and an amateur friend wanted to try dPMR simplex on 70cm. I know nobody on the amateur bands uses dPMR so it's perfect for short range, uninterrupted conversation.

I toyed with the idea of getting the Kirisun S780 again but they're not so great on the digital side of things when it comes to distance. Even though they're a nice radio I thought about something else and ended up coming across the Kydera DP-550S. 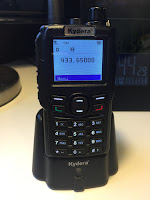 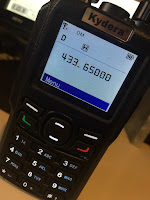 What a radio for the price! £60 delivered from a UK seller which I thought was a bargain. The radio took around 4 days to arrive and I wasn't disappointed when I opened the box. Inside was a small english manual which was good, a large 1500mah battery, belt clip, charger and chunky power supply and of course the radio itself. 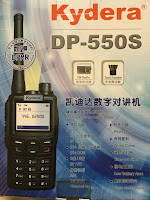 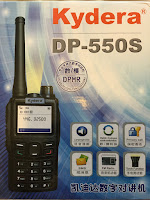 The radio is nice and solid, looks very commercialised as the pictures above show and is a little bit smaller in size than the TYT MD-380 and Baofeng UV-82. It has a nice weight to it which always makes a radio feel that bit better. The buttons on the front are rubber and the quality feels very good. They're illuminated buttons which make operation in the dark easier. The screen is nice and large and quite bright and doesn't seem to rinse the battery like the screen on radios such as the Wouxun KG-UV8D.

One side of the radio has the PTT, monitor button and a button that turns the backlight on and off. The other side has the speaker mic and programming cable port. On the top is the volume and on/off dial and of course that flash light.

I switched the radio on and had a quick look round it and decided to programme it. I was at a friends at the time and my laptop doesn't accept some types of re-written CD (which featured the software) and with no download available online I couldn't programme the radio. At first I was frustrated until I had a look through the menus and realised how much this little radio packs! 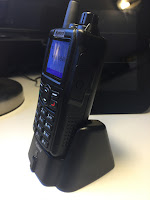 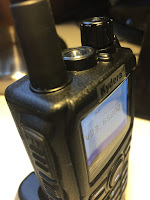 You can select VFO mode which I've never seen in any of the cheap Chinese digital radios before. When in VFO mode you can choose between digital mode and analogue mode too which I thought was such a handy feature. You can also select encryption which garbles the audio beyond recognition in digital mode. In analogue mode you can set your offset, CTCSS, DCS too.

Some of the other features you can customise from the front of the radio are:

The radio also features text messaging like most other digital radios which is another handy feature. Another menu item is GPS which allows you to turn the radios GPS module on. Unfortunately it doesn't have GPS and I don't see why this menu option is in the radio.

The display is nice and bright. The symbol in the top left shows when a signal is being received, DM and D show the radio is in digital mode. H means high power. 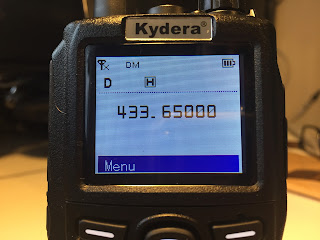 All in all I'm very impressed with the radio. It has plenty of features that the Kirisun dPMR and TYT DMR radios don't have. I've tested it out and the audio in analogue and digital is very good and the range is pretty average for a cheap handheld.

I've included some YouTube videos below so keep checking over there for updates on this radio.

Manchester, UK.
Posted by The MJJ Collection at 9:35 AM