So after watching these antennas for a year or so I decided to buy one. I got it more to see if it works than actually use it and the results were pretty interesting. I paid around £5 delivered from AliExpress and it came within about a week. 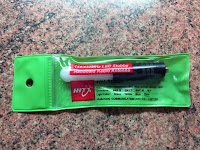 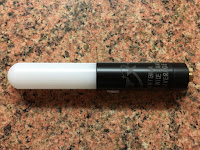 I got the red coloured one as it was the cheapest. Some of them go up to £18! It came in a little green slip case with the specs printed on the side; 2.15dBi, 50 ohm impedance and a max power rating of 10w. They come in green, yellow, blue and red.

I put it on the radio and did a bit of a range/audio/signal test to see if it worked and upon checking the clips I recorded, my home station lost signal from the antenna at the 2 mile mark as I descended down onto the motorway. I stopped the test here as I thought there was no way I'd get any more out of it. However, when I reached my destination 10.6 miles away I put a count out and the radio from home heard it which I found amazing from a Baofeng radio and what is essentially a stubby antenna which is sucking RF to power an LED! I did the same test the next night and got a 5/9 signal from the same spot. (See video in previous post).

I unscrewed the top that was glued in poorly to reveal the insides and the two LED's and a diode were just soldered to the inner core of the coax. Not sure how much stick it'd take before it came loose really. It also confirms that the LED's run straight off the RF from the radio. 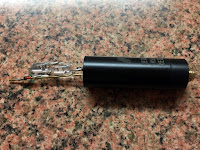 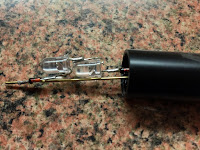 The last test was to test the brightness of the antenna in the dark and it is very bright! All in all a great little antenna which sure beats the gimmicky flashlight on the Chinese radios. Not sure what the SWR is like on there but at 4w output power I don't think my Baofeng will suffer. Not that I intend to use the antenna much either! 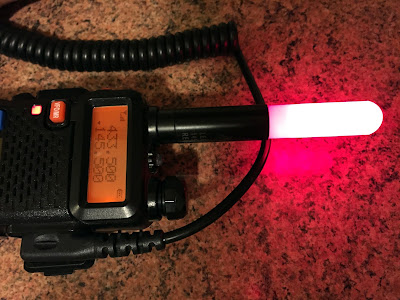 Manchester, UK.
Posted by The MJJ Collection at 3:03 PM