I recently purchased an AirNav RadarBox off eBay to monitor military aircraft in the area. I've always been a fan of FlightRadar24 and PlaneFinder but the RadarBox provides additional info, doesn't rely solely on the internet and of course shows military traffic. 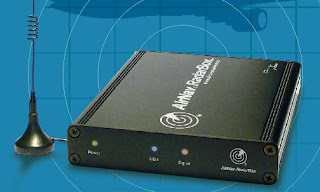 I came across a 2009 edition in mint condition with supporting software, antenna and relevant cables for £50 which is a bargain and a lot cheaper that other new versions. The box decodes ADSB signals on 1090MHz and displays them in real time on the screen. I also intend to make a 1090MHz antenna for better coverage.

I've included the Wikipedia write up below explaining the technical details:

AirNav RadarBox is a Windows PC software and hardware package which allows appropriately equipped aircraft to be seen on a simulated radar screen. A small receiver connects to the PC via USB and aircraft are detected using the small supplied antenna. By decoding ADS-B (Automatic Dependent Surveillance Broadcast) transmissions from aircraft, those aircraft are displayed on a computer in a similar display to that used by Air Traffic Control.

Flight number, aircraft type, altitude, heading, speed are visible and updated every second. The RadarBox system can be used at any location, either as a stand-alone system, or connected to the Internet which allows additional functions. An internal map database provides 3D multi-window maps with worldwide coverage and geographic points which include airports, runways, VOR, NDB, Fixes, cities, roads, airways and elevation data.

The screen consists of 2 major sections, the "radar" map and the tabbed information area. The map can be scrolled and zoomed using the mouse to view any area on the Earth's surface. Aircraft symbols and associated data blocks show flight information which includes aircraft type, registration and altitude. The information area allows viewing of aircraft lists for both live and network aircraft and gives access to other functions which include Alerting and Fleetwatch displays.

I'm looking forward to testing it out! I'll do a blog post when I've got it going.

Manchester, UK.
Posted by The MJJ Collection at 3:34 PM