I decided to tag along with my good friend Roydan M0LEX as he embarked on his first UKAC in 6 months on 2m. We stopped at our usual spot between Heywood and Norden which are 2 towns between Bury and Rochdale. The site is on the edge of Scout Moor Wind Farm which boasts some impressive turbines that are surprisingly quiet as their blades spin. Ashworth Hill Reservoir lies a few hundred yards to the North. Our cars with radio equipment set up. 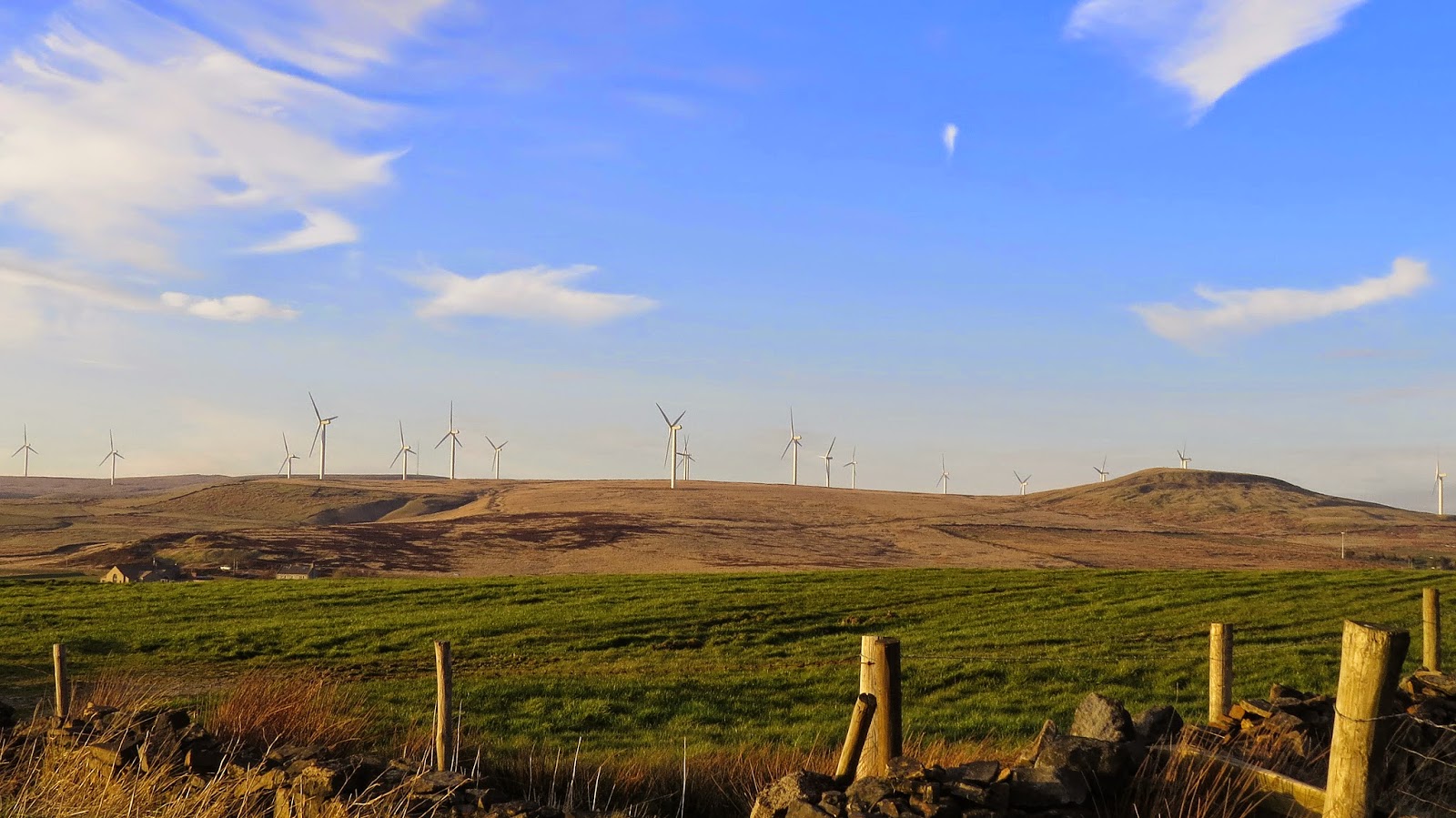 We arrived an hour early to get set up and mainly take in the amazing views the site has to offer. You can see as far as Holme Moss Transmitting Station to the East and as far as the hills of Blackburn and Darwen to the West. The view North is obscured by the Scout Moor Wind Farm and the view South stretches as far as the eye can see towards Manchester Airport and Alderley Edge. 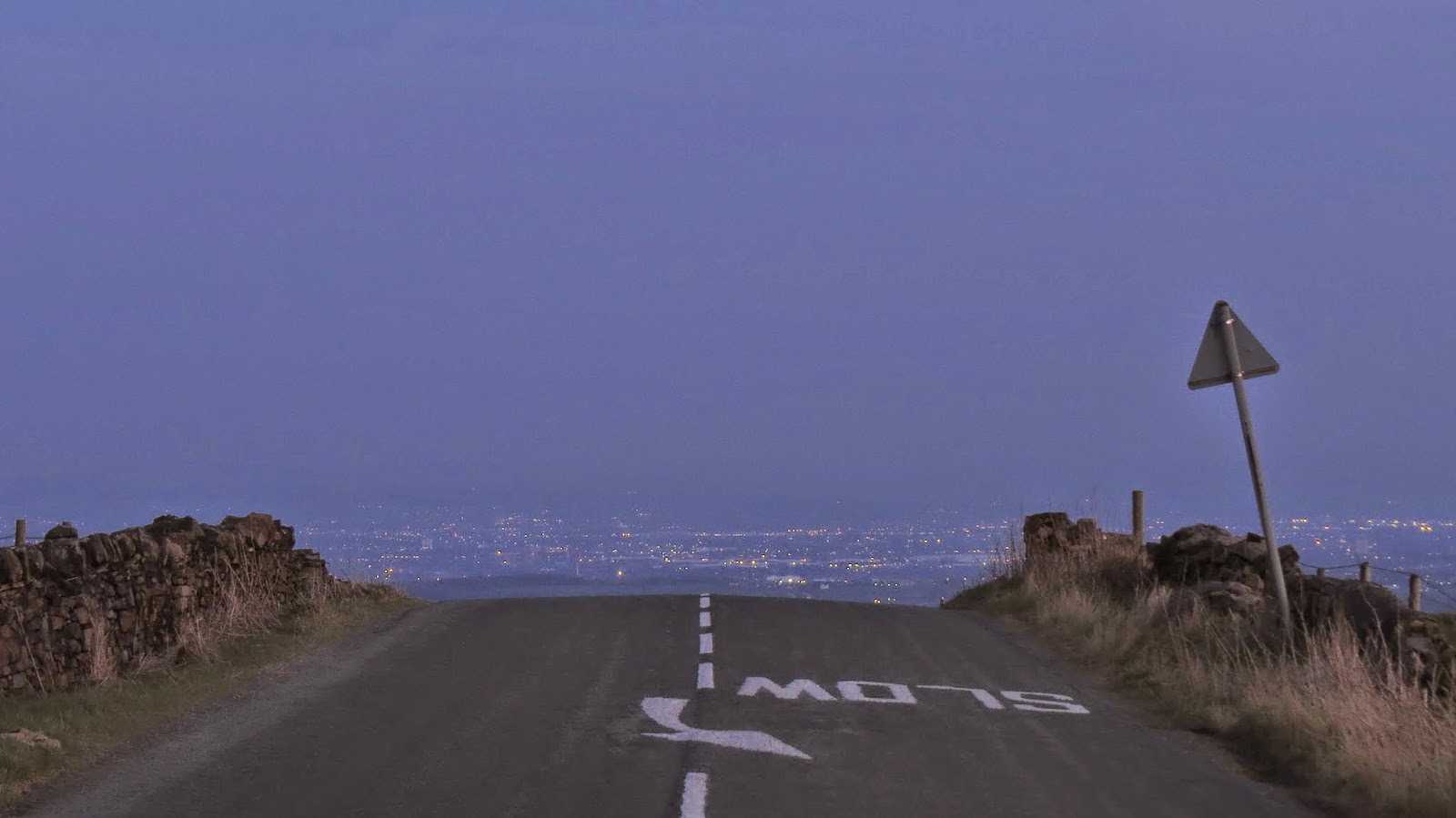 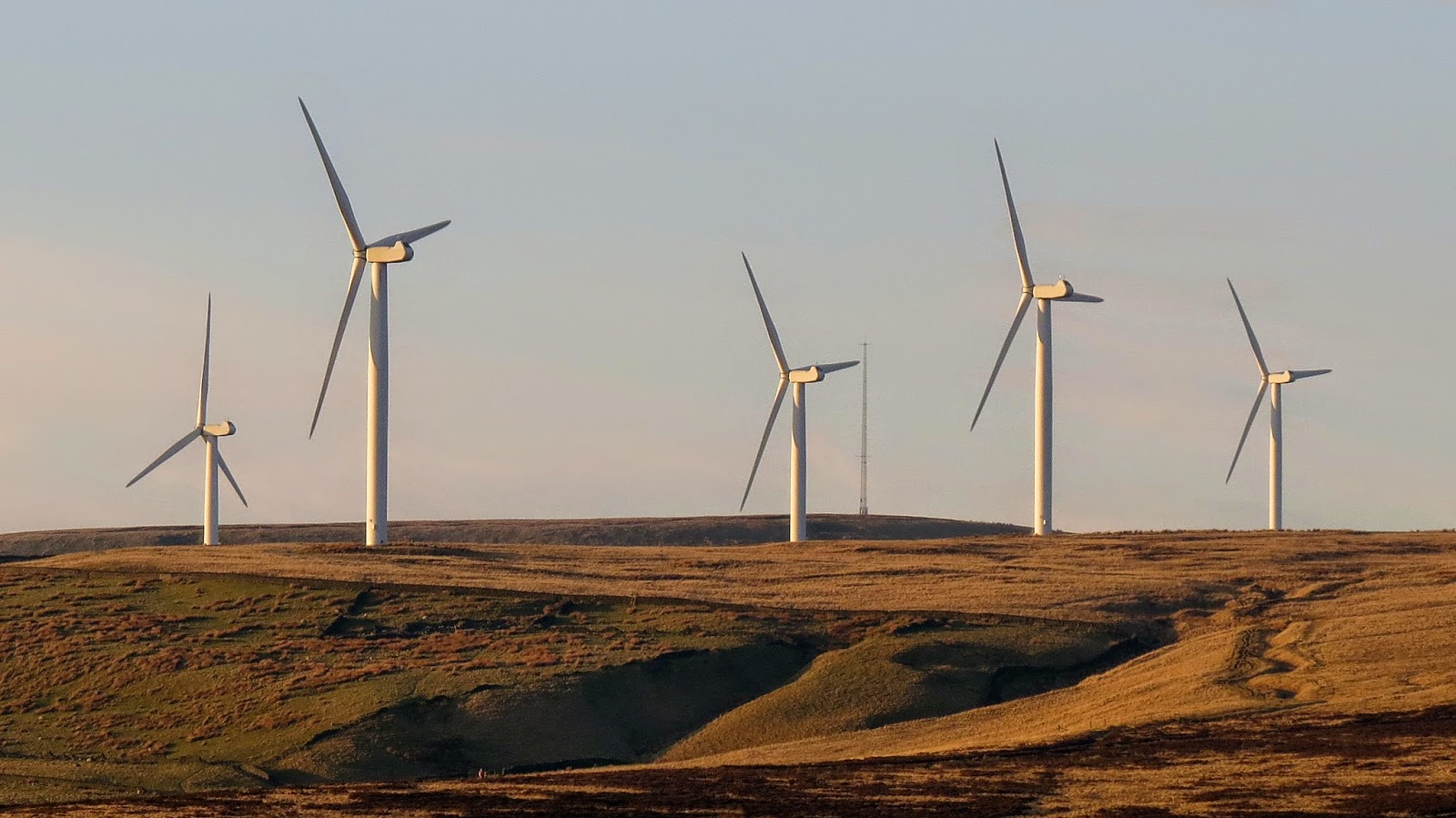 I took a few photos and some video footage of the views including an amazing sunset while Roydan set up his 6 element Jaybeam antenna and got his radio positioned in the car. I had a scan round on my Baofeng GT-5 with just the stock antenna attached and was pleasently surprised to hear Llandudno repeater GB3LL, GB3LI at Liverpool, GB3ST at Stoke, GB3MP at Denbigh and GB3CR at Mold all 5 and 9. Simplex on 2m FM was live and kicking and the usual PMR frequencies were active too. The sun set quickly and at 8pm he started the contest. 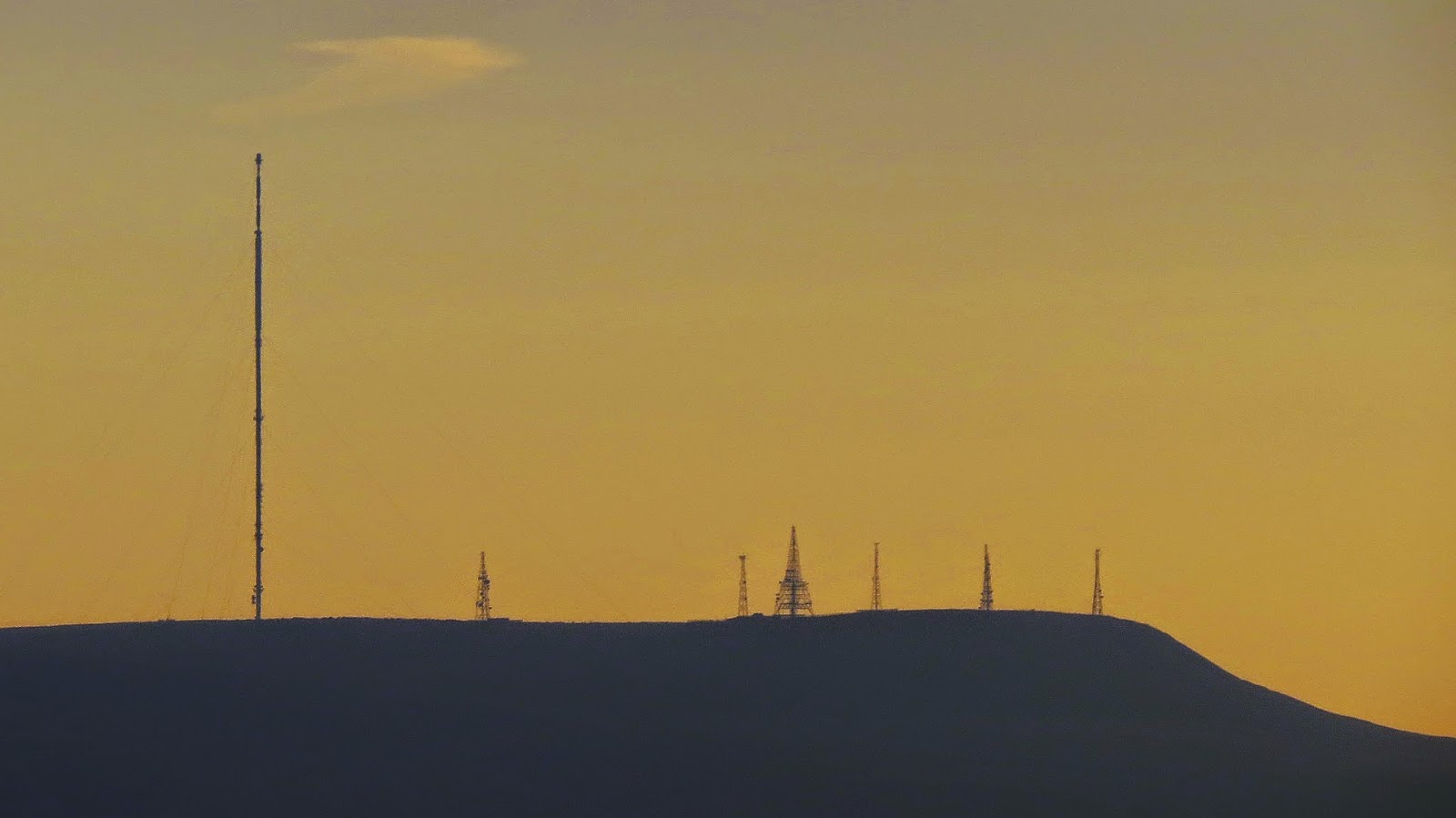 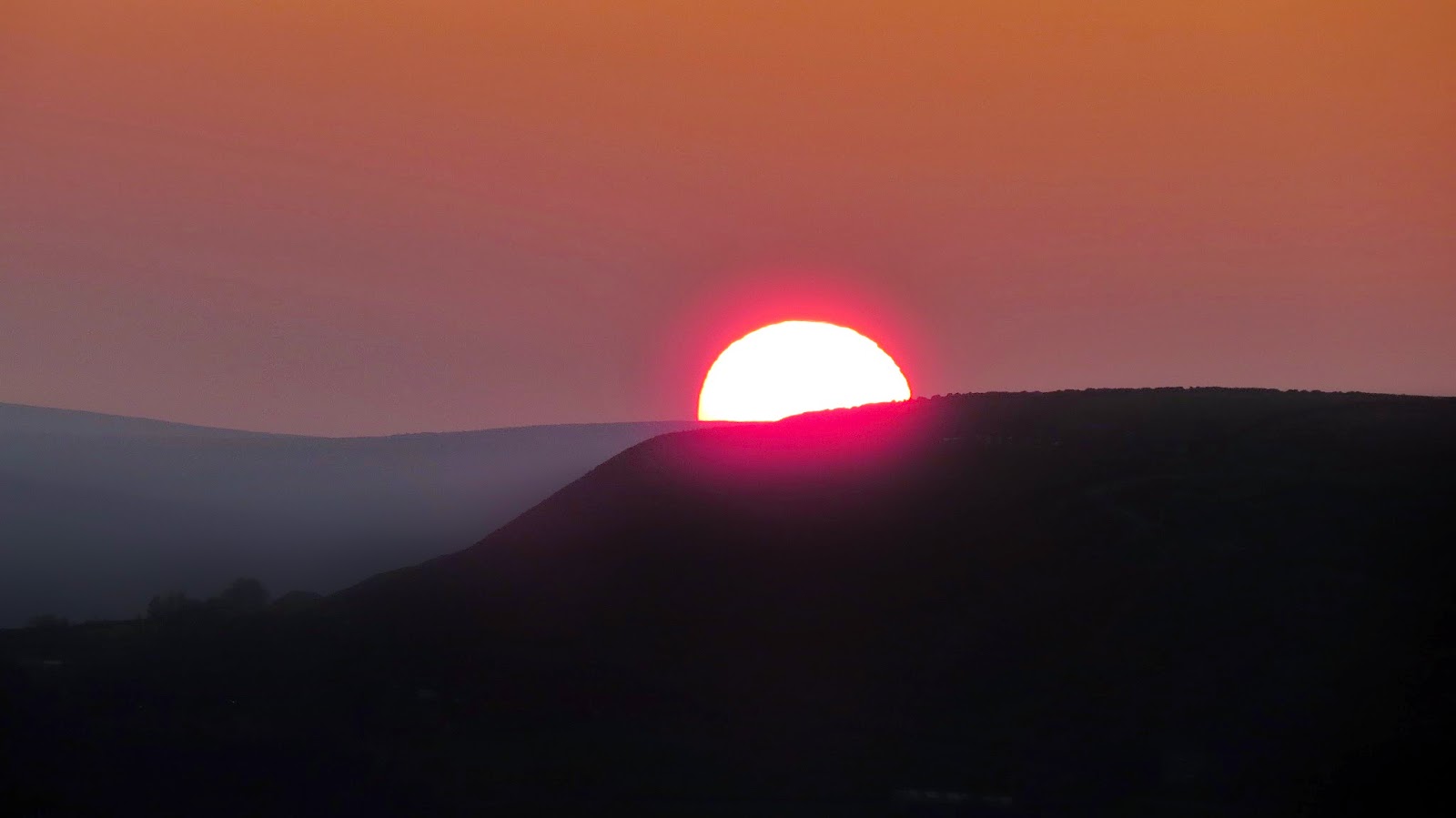 The first 10 or so contacts were all the same locator square as us (83) and made for a slow start but things soon picked up with ON5AEN calling in from Belgium.

When all sunlight disappeared completely the red warning lights on Winter Hill Transmitter began to appear in the dark 10 miles to the West as did the lights on Holme Moss Transmitter 20 miles to the East. The night sky was alive aircraft meandering their way towards their final approaches to Manchester Airport to the South and filled with stars and the odd planet twinkling away. 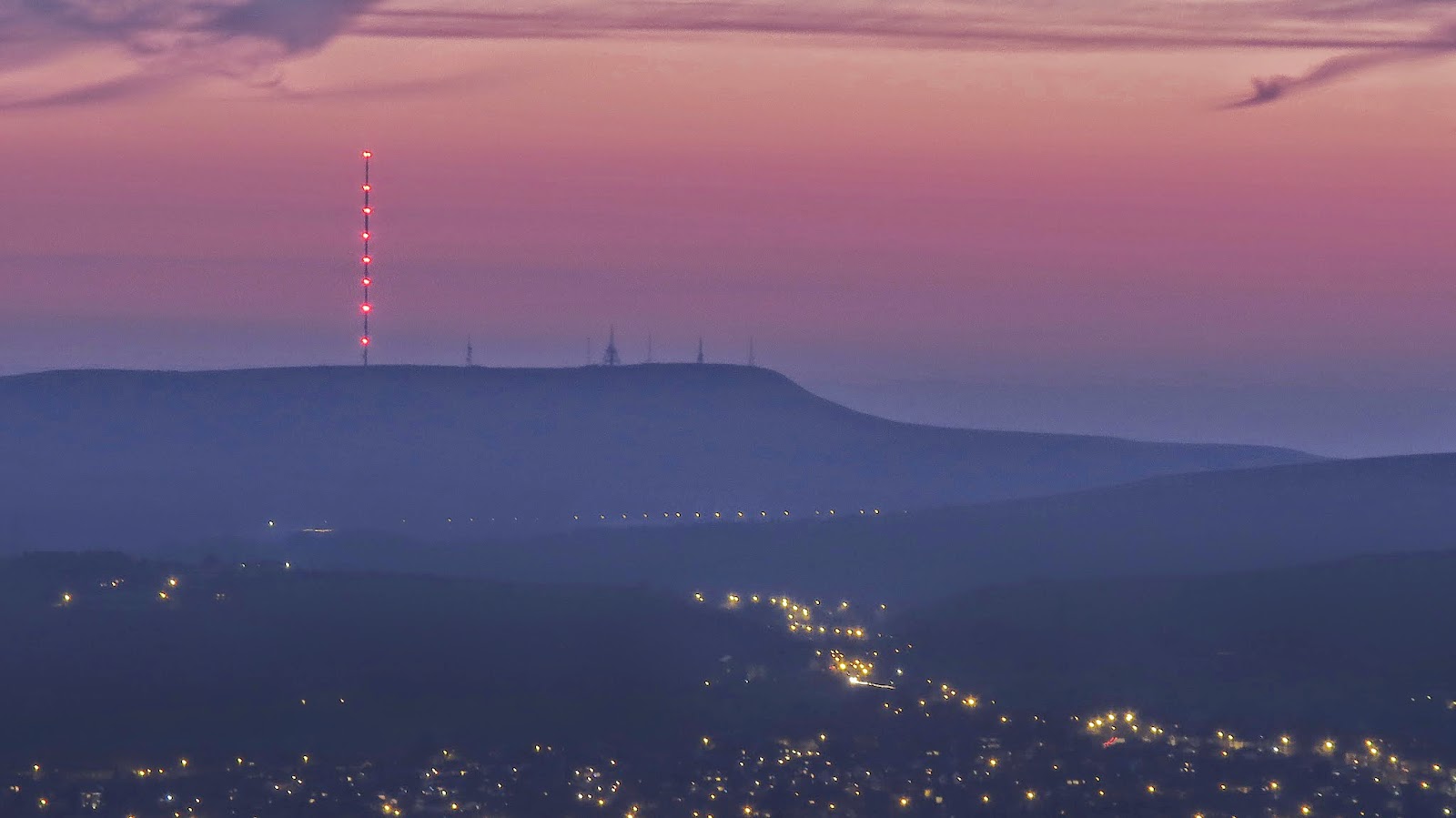 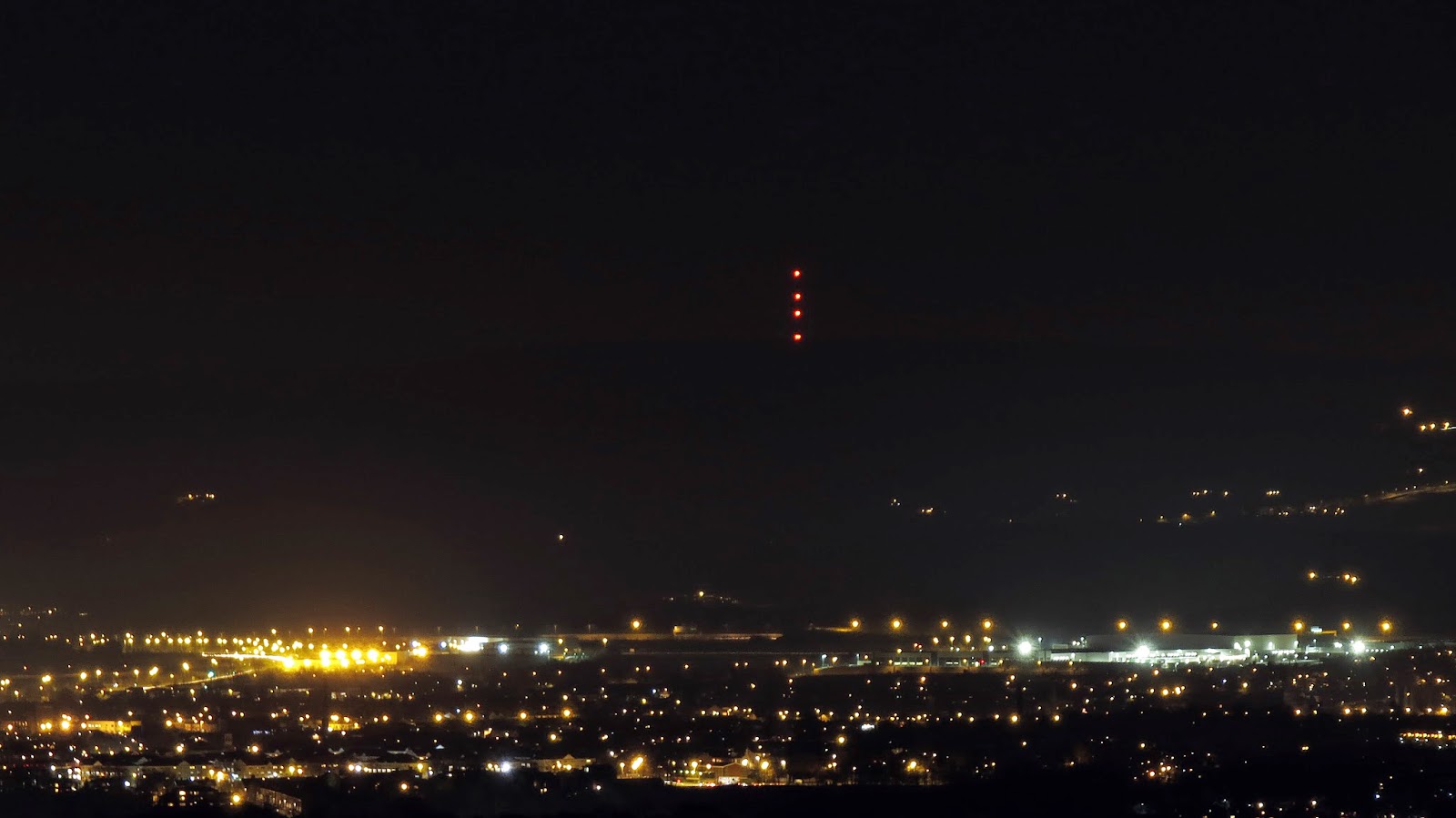 We exchanged 5/3 and 5/5 signal reports with stations down in Hampshire, Kent and Sussex to the South, Norfolk and Lincolnshire to the East and Cumbria and Scotland to the north.

After the contest ended with no less than 120 stations worked we packed away the equipment and spent an hour calling CQ on 4m on our Wouxun handhelds with nothing heard. I worked a couple of 2m FM stations; one in Wrexham and the other in Manchester. 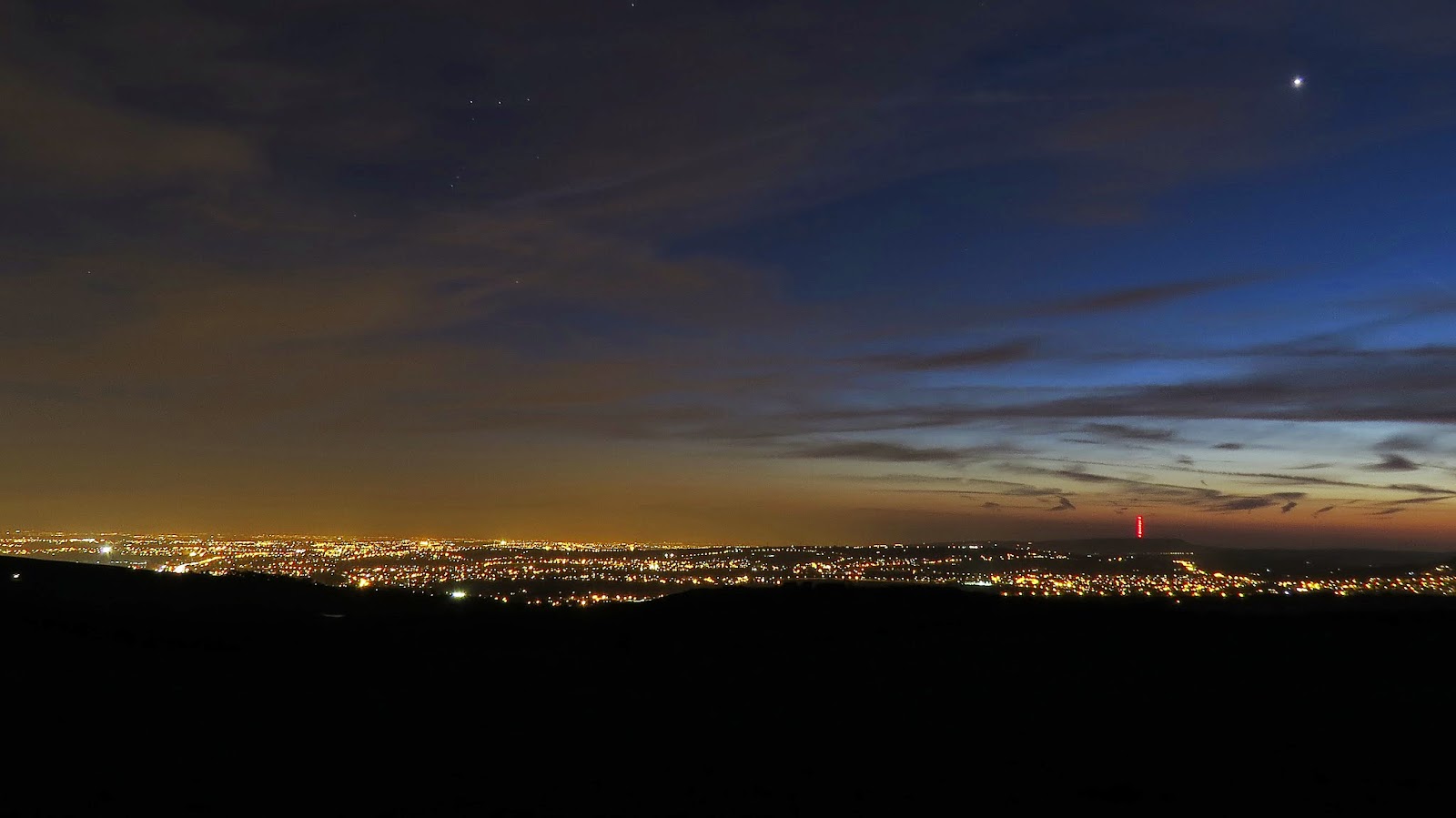 The view West towards Bolton. 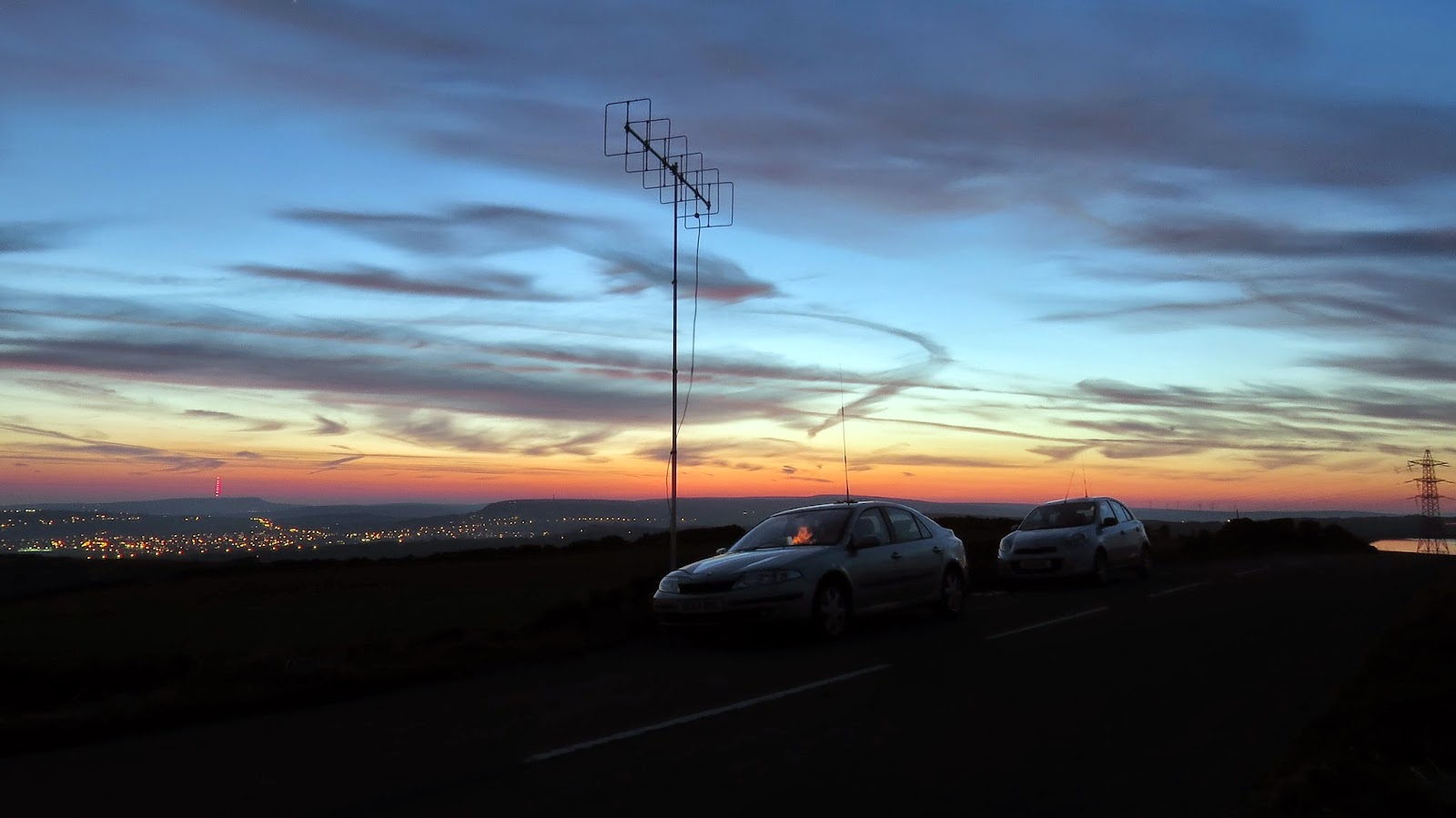 Antenna set up just after sunset. 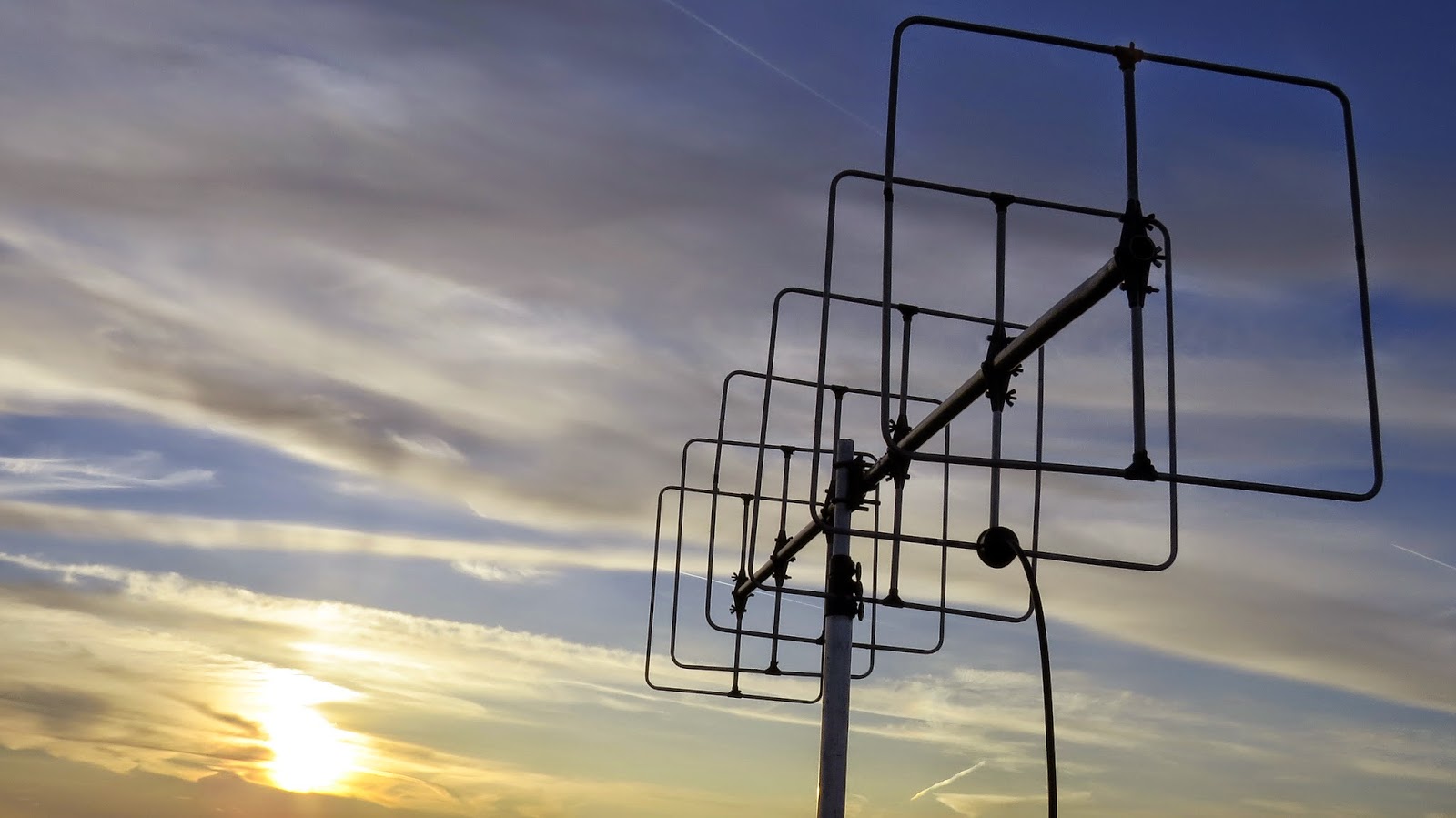 All in all a very good evening and I look forward to the next one!

I took some video footage of the views and some of Roydan's radio operation and uploaded it to YouTube:


The rest of the photos can be viewed on my Flickr here:
https://www.flickr.com/photos/mjjlivepics/

Manchester, UK.
Posted by The MJJ Collection at 4:35 PM