Sorry for the lack of posts lately, work has been hectic. I thought I'd do a bit of an update post. I had a couple of shack issues recently which luckily have been ironed out now.

Firstly, my SWR was really high on VHF on my Icom ID-5100 and as previously mentioned here I decided on a replacement antenna. I chose the Diamond X-200 dual bander for 2m and 70cm. Well I wasn't disappointed! I got the antenna up and noticed a massive difference immediately. +3 or 4 points on most local repeaters. Some other repeaters went from S7 to 5/9 60+ which was impressive. I'm also hearing more stations that bit further away on 2m which would usually struggle to break through the noise. The antenna is alot bigger and about 5-6ft higher than my existing X-50 so I'm made up with the difference. Picture doesn't do the difference justice from that angle. The X-200 actually starts near the top of the X-50. 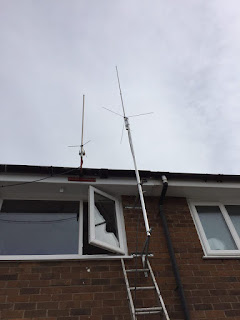 I've had this radio a couple of months and I noticed within the first couple of weeks that one day it just wouldn't turn on in the car. I checked all leads and fuses and couldn't find a fault. I was on my way out somewhere at the time so just left it, about 30 minutes later it turned on on its own. The fault didn't come back in the weeks following so I just forgot about it. Anyway, a few weeks ago I went to turn the radio on and it wouldn't come on. I waited 30 minutes and still no luck. I brought it into the shack and put it on a power supply and still no joy. I noticed when I pressed the power button that the fan came on for a split second and then went off.

I researched online and didn't come across anyone else talking about this fault. I posted a video on YouTube about the fault and a viewer posted a comment asking if the radio was a face off radio. I told him it was and he replied saying that he had the Yaesu version of the radio (8900) and it had the same fault.

Luckily the TYT comes with a car separation kit so I plugged the cable in and the radio came to life! Obviously very happy at how it turned out. I've left the radio in the shack for now as my car isn't suitable for mounting the radio with the separation kit but I'm glad it works as I was about to write it off.

Me and my brother bought one of these each and to be honest I was thoroughly disappointed with this radio from the start. It's not really the radio and more a charger fault I think. I got the radios and noticed the batteries drained despite being on charge for a while. The same issue on both radios had me stumped. I thought they may have been in some warehouse for a few months and the batteries had died. After swapping chargers and batteries between the two radios I had no luck so I emailed the seller on eBay who sent me a fresh pair of batteries direct from Sainsonic.

I put the new batteries on the radio and didn't give it much thought until noticed they still weren't taking charge! The seller offered to send me two Baofeng GT-3's instead of it costing me to send the Sainsonics back to China. I suppose it's better than nothing but I'll steer clear of the Sainsonic RST599 in future.

Manchester, UK.
Posted by The MJJ Collection at 3:46 PM