So I received my TYT TH-9800 last week and thought I'd share some thoughts on it.

The radio is a quad band transceiver that is gaining popularity in the radio world. It transmits on 10m, 6m, 2m and 70cm. The power output on high is 50 watts on 6m and 2m and 40 watts an 10m and 70cm. I got this off an eBay power seller who I've bough from before and it cost me £177 delivered which I thought was pretty good.

I bought the radio to replace my aging Icom 207 in the car primarily but also to monitor air band, and a broader VHF and UHF range rather than just 2m and 70cm. This enables me to monitor UK simple and PMR frequencies as well as other business and community repeaters that handle large volumes of commercial radio traffic.

It also gives me two bands that I have no other capability of using which are 10m and 6m. I still need to get the appropriate antennas and try my luck from a local hill to see if I can make any contacts on those bands.

The radio is an almost exact copy of the Yaseu FT-8900. It has identical control layout, display and menu options, minus the packet menus and data port. The TYT comes complete with separation kit, normally an optional extra with the Yaesu. The mic socket on the TYT is on the main unit whereas on the Yaesu it is on remote head. 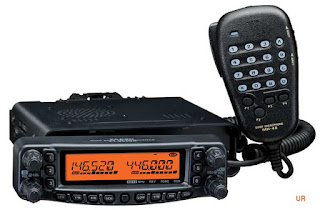 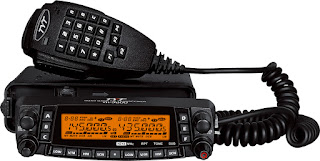 When I opened the box it contained the following: 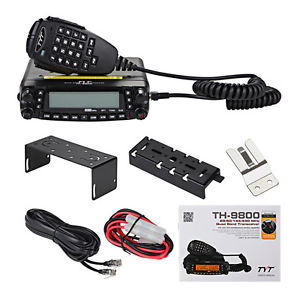 One of the things that attracted me to this radio is the frequency range. As I said it covers 10m, 6m, 2m and 70cm on transmit but it also covers alot of other frequencies such as air band AM in receive only. It also covers 760-950MHz receive but that is not much use in the UK.

This is the so called MkII version called the TH-9800 Plus. According to the manufacturer:

The old 9800 works as a repeater, yet it suffers severe
consumption and poor service life. Our 9800+, the latest
version released by TYT company, which has fixed some
bugs and provided more stable and sustained performance.

I don't know what the issues were with the previous version and can't find much on the internet about it so who knows.

I opened up the usual software but decided to try Chirp which worked a treat. Just like you'd programme a UV-5R, I entered my RX and TX frequencies, CTCSS, channel name, modulation, split, power and a number of other things and after editing settings in the software I wrote the file to the radio. Simple! 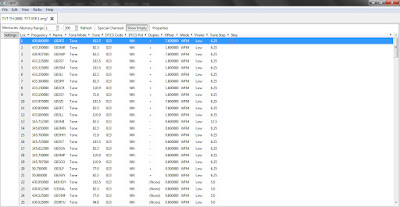 After programming the radio I took everything down to the car to start installing it. In my car, getting a cable from inside through to the battery is a nightmare so I was dreading trying to feed the cable through. Nor did I want to drill any new holes for the mounting bracket. Upon inspecting the current setup and the new radio I was pleasently surprised that I didn't need my wire coat hanger and rolls of electrical tape to pull the cable through the wiring loom gromet or my drill for new holes. Turns out the power lead off my Icom radio fits perfectly and the existing mounting bracket fits too! It seems TYT made the effort to make this radio compatible with other manufacturers unlike my TH-9000 which has a slightly different power connector. I swapped my old Icom out for the TH-9800 in less than 5 minutes and was ready to go.

I gave a call out on 145.500 and immediately got a station coming back from about 5 miles away on his Baofeng in the back garden nice and clearly so at least it worked! I had a quick scan round and everything seemed ok.

The microphone has a lock button which is handy for operation while driving. It also has a button to turn the keypad light on and off which is pretty useless. The microphone is very well made unlike the mic on the TH-9000 which feels quite cheap.

The radio has a remote head which comes on a 4 or so inch cable. There is a space cable in the box which allows you to put the radio to go under the seat and mount the head on the dash of the car. One snag with this is that the microphone plugs into the radio and not the radio head so you couldn't put the transceiver itself too far away as the mic lead is moulded into the mic and does not unplug.

The radio has dual watch capability with a split screen so you can monitor both VFO's at the same time which is pretty handy. The only thing is, when you key up on one VFO, the other VFO's audio is not muted so I've been chatting to a friend on my local repeater on VFO A and then VFO B has come to life causing me to re-transmit its audio which is a bit of a pain.

Side A is quad band but side B is VHF and UHF only for some reason, not that this particularly matters but you couldn't monitor 10m and 6m at the same time.

Quite a severe bug I found within minutes of testing this radio is that if the A-F buttons on the front of the radio which select between bands are pressed, any settings programmed in such as frequency step, bleep on/off, programmable key allocations and every other item in the settings menu reverts back to factory settings. This a major issue but luckily can be worked round by using the microphone and other buttons on the radio instead of A-F. I use the mic whilst driving so I can work round this, if this radio was being used in the shack I'd be senging it back to the seller. I have yet to programme the radio with the official software as opposed to Chirp so we'll see if that solves the issue although I doubt it. I'll be contacting TYT regarding this.

Scan can be hit and miss, sometimes it passes strong signals such as repeaters that are giving a 5/7 signal.

The radio gets hot! Even on 10w after prolonged use.

I have mixed feelings on this radio. It is a cheap radio and you get alot of radio for the money. For a quad bander with remote mounting kit and 800+ channels you get value for money. As I said above, there are a few bugs which I still need to try and figure out. As for TX and RX on VHF and UHF I'm very happy so far. I've yet to try the other bands including air band.

I've had very positive comments on audio and transmit quality on my local repeaters and also on simplex operation. Receive audio is loud and clear although a bit bassy likely due to cheap speakers being used in the radio. I may upgrade to an external speaker in due course.

There are alot of positive reviews and some very negative reviews reporting complete failure within a few months of operation. Time will tell!

Manchester, UK.
Posted by The MJJ Collection at 4:01 AM